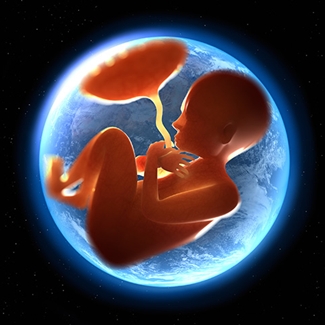 We know all about what babies learn once they are outside the confines of the amniotic sac. They learn to walk, talk, smile, have fun, and eventually, they grow up and learn the…em, meaning of life! But, we aren’t interested in all that your little one can be, but are concerned about what he learned before he set foot, or head, into the world.

Yup, you guessed it! Even if you didn’t, what we talk about here is what babies learn when they are inside your belly. Hint: there are some amazing things that go down. Take a look below.

If you were visualizing that your baby looks something like Buddha at his calmest inside the uterus, you couldn’t be more wrong. Unborn babies can listen to, and in some cases, recognize noises, while they are in the uterus. And, the most incredible thing is that a baby can recognize his mom’s voice in there as well. According to the results of one study, doctors were able to demonstrate how babies opted to listen to their mom’s voice.

We’ve determined that babies do have a good ear for sounds. Moreover, studies suggest that a baby begins learning his native language while still in utero. Babies will pay more attention to anyone or anything speaking their mother’s language.

A 2011 study by the University of British Columbia maintains that infants raised in bilingual households may also be able to tell the difference between English and French.

A baby’s eyes are sealed shut until the seventh month of pregnancy. But, even after they open, the fetus cannot see much as there is no light around him. However, some studies say that shining a torch at your fetus causes the unborn baby to turn his head away, which hints that babies may recognize light even before they open their eyes. Ultrasounds also tell us that as the baby nears delivery, he opens and closes his eyes much often, to practice blinking.

While you are probably already eating for your baby and you, the quality of food always trumps quantity. A fetus typically develops around the seventh or eighth week of pregnancy and the 15th week onwards, there is evidence that a baby can distinguish sweet, sour and bitter flavors in food. This is why your baby may not nurse if you include a newer spice in your food, as it may alter the taste of your breast milk.

5. Develops a sense of smell:

An unborn baby can taste and smell food as well. Amniotic fluid has been known to smell like cumin, fennel, garlic, and spices that the pregnant woman had during her gestational period. Babies live inside the amniotic fluid, they swallow it and breathe it. The fluid smells like his mom and like the foods as well. This is also one way that newborns recognize their mommies. Some studies also showed that babies prefer to nurse from unwashed breasts, which they can locate because they can smell mommy.

So, there you have it. Five things that your baby already knew before he came into the world.

Baby Milestones mothers will NOT post on social media